Yesterday I made notes for a post that might be seen as a little bit over-dramatic, even for me. The artfully repetitive prose and doomy gloomy metaphors, although eloquently written if I do say so myself, border on the ramblings of a mad woman. So instead of sharing these, I’ll tuck them away for a future therapist and in their place briefly describe to you my mindset over the last few days.

Galicia is a strange place even at the best of times, and the last 100kms have been known to have an effect on pilgrims. Long before you reach them, you start hearing of the crowds of “new” pilgrims joining the route, clogging up the roads and cafes, and generally interfering with your chilled out vibes. Having strolled casually for a good few hundred kilometres, suddenly you find yourself putting your head down and marching 50 kilometres a day, snarling in response should anyone dare to interrupt you and wish you a good journey. More often than not though, this change is entirely a mental one for the walker, apart from the occasional inconvenience of having to wait slightly longer to use a toilet.

As I started to find my pace marching against the crowd, comforted by the odd appearance of a blue arrow reminding me that I’m not the only person to have ever attempted this, something switched in my brain. Maybe it was the gargantuan groups of gaggling school children asking if I am walking back to Sarria, or the crowds that maintain their trajectories at all costs forcing me to hobble into the ditch to avoid them. Finally, on cutting my finger slicing some particularly slippery chorizo and being denied a plaster by a pilgrim because it was too far into her bag to be convenient to retrieve, I lost the Camino spirit.

I hid in my bunk and binge-watched all of The Haunting of Hill House on Netflix. Unsurprisingly, this did not improve my bleak outlook, and in the morning when my bunk mates had ensured that I was well and truly awake by shuffling in their bags for an hour, I rose and pressed the reset button on my day by walking away again.

And then Galicia worked it’s strange magic. As characteristic of the region as the crowds of pilgrims, a fog had descended and engulfed the landscape. I dragged myself along, cursing and allowing myself to revel in those repetitive, negative thoughts, all the silly things I’d so dramatically penned the night before, and then the sun rose and stopped me in my tracks as it burnt it’s way through the mist.

If the forwards walk can be divided into stages of mind, body and spirit, then for me it’s possible the reverse walk is comprised entirely of mind. Or at least this is the stage I appear to be stuck in. And since you aren’t my future therapist, I’ll save you the rest of my rambling here and say instead that it’s time for me to stop thinking and start looking. It’s time for an art project.

One thought on “The Wrestle” 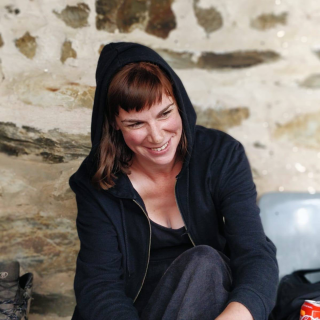 The Everyday Residency is brought to you by Rebecca Jane Johnston, a travelling visual artist from London.